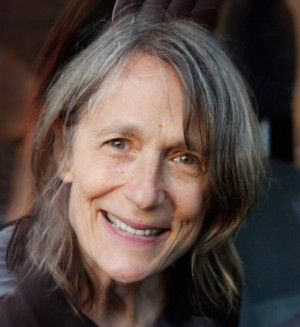 Nora Jacobson started Off The Grid productions in 1995 after she returned to her native Vermont. Before that, she had been living in Hoboken, NJ, teaching film at SUNY Purchase, The New School and other schools in the NY metropolitan area, and working as a free-lance filmmaker and editor. And before that she had been making experimental films at the School of The Art Institute of Chicago, studying with Stan Brakhage, P. Adams Sitney and Fred Camper. But mostly, during those Hoboken years, she was making Delivered Vacant, an epic documentary that took 8 years to complete, and went on to premiere at the New York Film Festival and Sundance. She took a few months off to direct and edit Habits & Choices, a documentary about drug addicts living with AIDS, for the Jersey City Medical Center, and shot a documentary for the Sundance Institute. In 1993, while still living in Hoboken, Nora began working on a screenplay, My Mother’s Early Lovers based on an unpublished manuscript written by a Vermont writer, Sybil Smith about her agrarian/socialist parents who had lived on a commune with Scott and Helen Nearing. Nora and Sybil wrote the script together, with Nora commuting to Vermont periodically for readings and fund raising. Finally in 1995, Nora moved back to Vermont, started Off The Grid Productions and with the help of Bill and Jane Stetson and many other supporters, made My Mother’s Early Lovers, her first dramatic feature film. Twenty years later, Nora and Off The Grid productions are still in Vermont, enjoying the close-knit film and arts community, the mountains and ethos of the state of Vermont. Since My Mother’s Early Lovers, Nora has made many other films including her second feature film, Nothing Like Dreaming, the documentary Tremors in the System (with Marj Berthold), and the collaborative 6-part series Freedom & Unity: The Vermont Movie, working with over two dozen Vermont filmmakers. She is a founding board member of the film festival White River Indie Film, and helped start Freedom & Unity TV, a youth film festival for young Vermonters. She is currently making several new films, including The Hanji Box (in distribution on Amazon Prime), three documentaries–one about poet Ruth Stone, one about the Cornish Art Colony and one about pond hockey in Vermont. She also is in the development stage of a TV series about free people of color in New England in the 18th and 19th Centuries, called “A Peculiar freedom” with filmmakers Rob Koier, Richard Wesley and André Lee. She is also working on a screenplay about the relationship between a white captive and her Abenaki captor. Nora also works with the Vermont Archive Movie Project, to preserve Vermont’s film heritage.