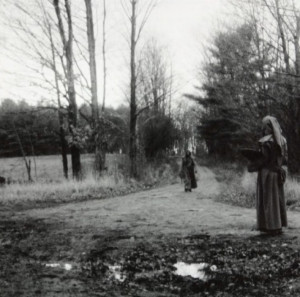 Made by a Vermont collective of women led by Barbara Hirschfeld & Julia Haines. A fascinating feminist experimental fiction shot on location in Vermont about a group of witches performing white magic. | Screened October 31st, 2015 at the Vermont International Film Festival. Statement from Barbara Hirschfeld: "Transformations began as a way to use the act of filmmaking to heighten experience. The central idea was to suggest that, through ritual, women could leave their ordinary lives and enter a self-created sacred space, transforming themselves and being transformed in the process. To our surprise, the act of filmmaking heightened the power of ritual. In other words, every aspect of making the movie was a transforming agent, from conception, through collaboration, through production, through editing. The film is a fantasy. In the mid 1970's, Barbara was part of a community of women who often gathered together to read and understand feminism, to encourage and support one another, to help each other break free of some of patriarchy’s external and internalized limitations. The film references ancient traditions from a number of sources. Since before the Middle Ages, women who used herbs to heal and to aid in childbirth became known as witches. They were feared and reviled because of their knowledge, but also because they dared to step outside of the patriarchal dictates of church and society. This film echoes that deep history, but exists entirely in the realm of the metaphoric and the mythic."