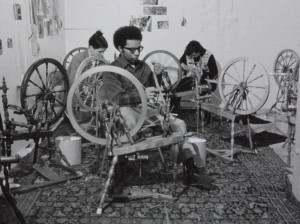 In the 1840s, Vermont was the center of wool production in the United States. Today, those few sheep in the state are largely pets. But the Shelburne Spinners think they can bring back the days of wool supremacy in Vermont. The Shelburne Spinners, a special project instigated by the Arts and Crafts Service of Vermont, has been set up for many reasons: to use Vermont products, to employ the unemployed, for the satisfying feeling of working with one's hands. And not least important is the feeling one gets from seeing a job through from start to finish -- from the shearing to the yarn. Bob Burroughs shears sheep, an almost lost occupation in the state. Within minutes a wooly sheep is shorn of his matted, twiggy wool, and Burroughs goes on to another animal. But there's a lot to be done yet before the spinner can sit down to the wheel. The wool must be carefully washed and rinsed to separate the natural fats and sweat from the wool. The wool is "picked" to sort out the twigs, thorns and miscellaneous small bits of foreign materials. And finally, the spinner finds herself with a large mound of wool and a spinning wheel. Much of the yarn produced by the Shelburne Spinners is utilized in the various natural shades -- browns, blacks, off-white and shades in between. And some of it is dyed with natural vegetable dyes, with rich, earthy tones resulting. Guests on the program will be Marilyn Leimenstoll, Community Coordinator and initiator of the Shelburne project; D'Ann Fago, Director of the Arts and Crafts Service for the State; and Vicki Fraser, Executive Director of the Shelburne Spinners, which is a cooperative. Filmed footage of Burroughs clipping and sheep on-the-hoof generously augment the studio dialogues. Host for the show will be Judy Saurman.