Quebec and the Third Option 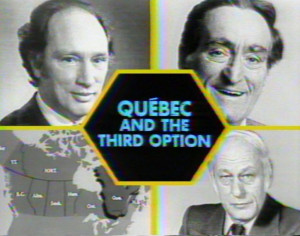 Quebec and the Third Option

The scope of the Partis Quebecois election success on November 15, 1976 seemingly mandated a course for the Province of Quebec toward a final destination of political sovereignty and a form of economic association. This, coupled with honest, efficient, and representative government, hopefully would form "the ideal state" which French Canadians had long aspired to attain. But, spawned of this political phenomenon was also a range of reactions to the P.Q. goals. Among the most prominent critics was editorialist Claude Ryan, then publisher of the influential daily "Le Devoir" for thirteen years, who remained an intellectually honest but acrimonious "back-bencher" of the Canadian community of journalists until Spring of 1978. And then the next benchmark in Quebec political history was scribed on April 15, 1978. Claude Ryan convinced a decisive majority of the 2,640 delegates to the Liberal leadership convention in Quebec City that he was "The Leader." After fifteen years of editorials, the man who has been instructing governments in the art of administration is now prepared to do it himself. On November 15, The Liberal Party experienced a stunning loss of power in the Levesque victory election; their numbers in the Quebec National Assembly decreased from a controlling 96 to a minority 26 seats. However, as the mid-term point in the Levesque administration approaches, Claude Ryan has succeeded in reviving the traditional strength of his party and, based on the results of the latest political poll commissioned by Radio Canada, "if an election were held today, the Liberals would receive 40% of the popular vote" (an increase of 12% since March). As Rene Levesque wrote recently, "So much is changing so fast that you get the feeling maybe change itself is becoming the only law to be counted on." This program consists of two segments. First, a four-minute scripted introduction featuring an interview with Claude Ryan in May of 1977, just six months after the provincial election. Second, an exclusive interview with Claude Ryan, leader of the Quebec Liberal Party, and Jack Barry, Vermont Educational Television's Director of Public Affairs, focusing on change, Quebec and the Third Option (Independence, Confederation, a distinct status for Quebec). Among subject areas discussed: 1) The historic issue, the constitutional question and the cultural guarantees of Quebecers. 2) Description of "a distinct status for Quebec." 3) The French Fact in Canada, linguistic duality and the political failure of the federal system. 4) The Ryan role in the "Canadian Constitution game." Potential for revision, amendment and salvage. 5) Ryan has never had a peer relationship with Prime Minister Pierre E. Trudeau, in fact, he has not seen Trudeau since 1975 and then only briefly. How does he expect "to force Trudeau's hand a bit"? 6) Inflation and control of growth of the public sector.