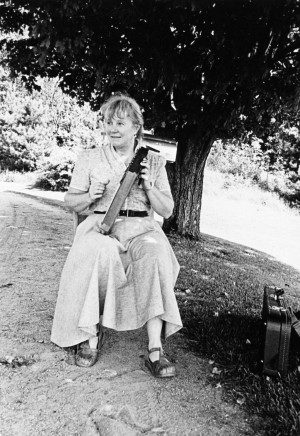 This documentary traces the history of traditional and country music in Vermont. The hour-long special features performances by over a dozen Vermont musicians and includes interviews with historians. The program begins with a nineteenth century Vermont ballad, "Young Charlotte," sung unaccompanied by Cordelia Cerasoli, of Barre, as she learned it from her mother. The program continues to trace the ballad tradition through the singing of Margaret MacArthur, of Marlboro, and Norman Kennedy, of Maple Corners. Kennedy, who is also a weaver, comes from Scotland and represents the older British Isles music that is the basis for much American folk tradition. The fiddling music of Ron West, of Richford, and Wilfred Guillette, of Newport, represents another branch of American folk music. The two reminisce about playing music in "the old days," learning to play the violin from their parents and grandparents. Guillette says that he practiced his craft at "Kitchen junkets," a weekly gathering of neighbors who would roll back the rug--sometimes even moving the stove onto the porch--sip punch and dance. As the program continues, performers stress the impact of music in their lives and talk about their families' musical influence. A co-production of vermont ETV and the Onion River Arts Council.

Production funding by Vermont Council on the Humanities and Public Issues